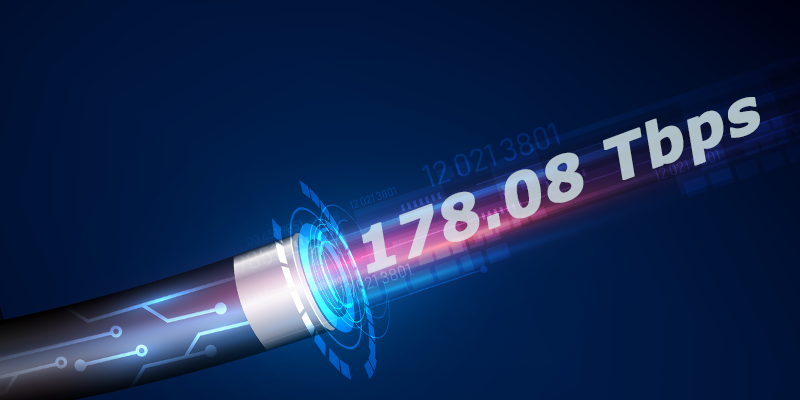 A recent paper from the TRANSNET Programme reports a record optical fibre transmission speed of 178.08 Terabits per second, a fifth faster than the previous record and three million times faster than the average UK broadband connection.

TRANSNET members have published the results of an experiment that demonstrates the fastest transmission speed on record over a conventional single-mode optical fibre.

The record was achieved by transmitting data through a much wider range of colours of light, or wavelengths, than is typically used in optical fibre (16 THz of optical bandwidth, provided by Corning). To do this, researchers combined different amplifier technologies needed to boost the signal power over this wider bandwidth and maximised speed by developing new Geometric Shaping (GS) constellations, manipulating the properties of each individual wavelength. The achievement is described in a new paper in IEEE Photonics Technology Letters.

The research, led by TRANSNET Co-I Dr Lidia Galdino UCL's Optical Networks Group and in collaboration with Xtera and KDDI, showed that efficient use of the widest optical fibre bandwidth possible is the most effective way to increase optical fibre system capacity.

Applying the proposed approach to existing optical fibre infrastructure would lead to increased capacity while importantly minimising both costs and delivery time-scales for ultra high capacity networks, highlighting the potential impact of the work on the development of next-generation digital communication systems.

The goal of the TRANSNET Programme is to transform optical networks for the cloud by introducing intelligence into the networks to deliver maximum capacity, when and where it is needed; the results of this paper demonstrate the vast progress the programme has already taken along this path.

The work was widely covered by the media – please find below links to the UCL press release as well as coverage by the BBC and the London Evening Standard.